Access our current meeting announcement. To be added to our email list, please send a message to vice_chair@aegsf.org.

If you’d like to present a geology-related topic or the latest in environmental or geotechnical technology to our chapter, contact our Chair or Vice Chair to schedule a presentation date!

A Selection of Past meeting summaries:

June 2022: AEG President Maddie German “The State of AEG and A Not So Routine Hydrogeologic Study” at Zio Freddo’s.

May 2021: We had a pop culture themed virtual trivia night. In the midst of the pandemic, it was nice to see some familiar faces and play some games. We would like to turn this into a geology-themed trivia night in 2022!

June 2015: Our June meeting at Pyramid Brewery in Berkeley featured Jahn’s Lecturer Eldon Gath who spoke about the Alquist Priolo Fault Zoning Act and suggested some improvements to bring the Act in line with modern mitigation methods. 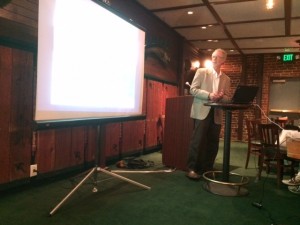 May 2015: Our May meeting was a joint meeting with Groundwater Resources Association at Spenger’s in Berkeley and featured the USGS 2015 Birdsall-Dreiss Lecturer Clifford Voss, who spoke about Density-Driven Groundwater Flow: Seawater Intrusion, Natural Convection, and other Phenomena. 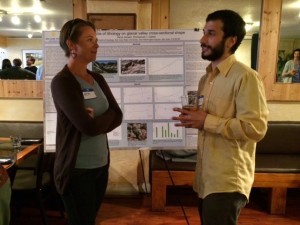 March 2015: We hosted a Happy Hour event at Pacific Coast Brewery! Thanks to all who attended.

January 2015: This month’s meeting featured Julien Cohen-Waeber, who spoke about the GEER Response to the South Napa Earthquake.

October 2014: AEG President Ken Fergason discussed the latest in AEG happenings, including the Governance Restructure as well as his work on the Hoover Dam Bypass Bridge project, performing a Geotechnical Field Investigation using climbing and rappelling gear in 120+ degree heat. 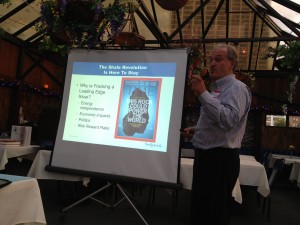 July 2014: This month’s meeting featured Earl Hagström of Sedgwick, LLP who discussed “The State of Hydraulic Fracturing” at Sinbad’s.  This meeting was sponsored by Woodward Drilling. 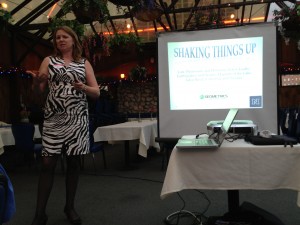 Gretchen Schmauder talks about the seismic risk to the Tahoe Basin due to the West Tahoe Fault.

June 2014: This month’s meeting featured new section member Gretchen Schmauder, PhD, of Geometrics, Inc., who was most recently the chair of the Great Basin Section! Ms. Schmauder presented “Shaking Things Up- An Updated Approach to Faulting and Seismic Hazards in the Tahoe Basin.”

May 2014: We featured AEG President Gary Luce of Resource Concepts, Inc., this month! He presented “Virginia and Truckee Railway Historic Tunnel Construction: Reconstruction of Tunnel No. 2 and Proposed Reconstruction of Tunnel No. 6”.  We additionally hosted an on-the-spot fundraiser for the AEG Foundation, where all of our donations were matched by Bob Tepel.  Including the match, we raised over $800!  Additionally, thanks to our “Sponsor a Student’s Dinner” feature on our registration page, our student members attended for free!  Thanks everyone!

April 2014: This month’s joint meeting with ASCE-SFGI at Sinbad’s featured an “Update on Geological Conditions and Construction of the Central Subway Project, San Francisco, California” by Ken Johnson, CEG, PE and Matt Fowler, PE of Parsons Brinckerhoff.  We learned how difficult it is to tunnel below the streets of San Francisco and that tunnel boring machines can have twitter handles! Follow the TBMs @BigAlmatheTBM and @MomChungtheTBM. 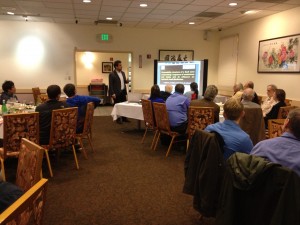 Thank you to our sponsors: Cornerstone Earth Group, San Jose State University, and Patrick Drumm of CSU East Bay!  Thanks to your support, all of our students attended for free!

January 2014: This month’s meeting featured our very own Vice Chair Morley John, PE of Kleinfelder who spoke on “Constructing a Driven Pile Foundation through a Closed Landfill, Underlain by Young Bay Mud and Undulating Franciscan Mélange Bedrock” at Restaurant Peony in Oakland.

November 2013: This month, we joined ASCE-SFGI at Scott’s in Oakland for a presentation by Donald Wells, Jim French, and René Vignos on the “Renovation and Seismic Retrofit of California Memorial Stadium (or How to Straddle the Hayward Fault with a Historic Structure)”  This presentation had a fantastic turnout, with over 100 members and students in attendance! 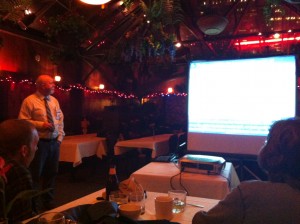 September 2013: This month’s meeting featured the 2013 AEG Jahns Lecturer James McCalpin of GEO-HAZ Consulting, Inc., who presented “The Mountains are Falling Apart; A Spectrum of Mass Failures from Landslides through Deep-Seated Gravitational Spreading (Sackung), to “Unfolding” of Folds”.  Mr. McCalpin’s presentation was based on his research into sackungs since 1994 which were found in Colorado ski areas.

Bill Motzer’s presentation on a beautiful night at Sinbad’s

August 2013: William (Bill) Motzer, PhD, PG, CHG of Todd Engineers spoke about “Mercury Deposits of the California Coast Range and Their Environmental Impacts” on a beautiful night at Sinbad’s.

Ken Lajoie with an old-school slide show presentation and a stick pointer!

June 2013: This month’s meeting was a joint meeting with Groundwater Resources Association and California Council of Geoscience Organizations at Spenger’s in Berkeley.  Ken Lajoie, PhD, retired geologist from the USGS presented “The Natural and Unnatural History of the San Francisco Bay”  Ten dollars from each registration went toward supporting CCGO.

March 2013: We hosted a double-header meeting this month featuring a “Short Discussion on AEG’s Coordination with the California Earthquake Clearinghouse” by Anne Rosinski of CGS and “BPELSG Update and Discussion” by Ric Moore and Erik Zinn of BPELSG which featured a lively discussion regarding the future of licensing for geologists, engineering geologists, hydrogeologists, and geophysicists.

Reterro designs, builds, and deploys its own proprietary equipment for flameless, indirect-fired, batch ex-situ evaporative desorption of contaminated soils.  Reterro dispatches its mobile equipment to job sites where its team of operators excavate, decontaminate, and restore the soil.  For larger projects, a semi-permanent, high-throughput unit can be installed at the project site.

November 2012: This month, Anna Sojourner, MS, CEG of Caltrans District 4 presented “The Presidio Parkway, Phase 1 – Doyle Drive Replacement and Demolition” project to a packed house of engineers and geologists for our SFGI / AEG Joint Meeting at Scott’s Seafood in Oakland. 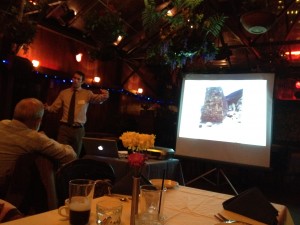 James Chinchiolo discusses the mechanics of holding back rockfalls and landslides.

September 2012: We had a great time at our Happy Hour this month at Pacific Coast Brewing Company in Oakland.  Congratulations to Sean Harvey and Craig Reid, lucky winners of fantastic bottles of wine!

July 2012: This month’s meeting was sponsored by Test America Laboratories!
Jennifer Bauer, our AEG President, spoke with the section regarding the latest AEG National news including website improvements and the drive to promote membership.  Jennifer encourages all of us to take advantage of networking and educational opportunities at the Annual Meeting this September in Salt Lake City, Utah. 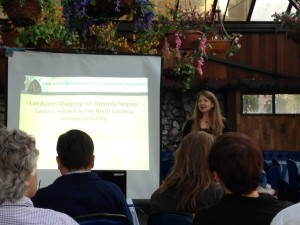 For the technical part of the program, Jennifer Bauer spoke to us about “Landslide Mapping on Slippery Slopes: Lessons Learned by the North Carolina Geological Survey” which illustrated the need for mapping landslide hazards to protect human life and property in hillside areas.

Additionally, John Williams represented the AEG Foundation and launched an on-the-spot fundraising drive to benefit the foundation, which supports geology students and professionals with scholarships, field camp sponsorship, and financial offset to attend the annual meeting, among other programs.  The donations were jumpstarted by matching donations by Bob Tepel and John Williams.  In a span of 30 minutes, our section raised over $800 for the foundation!  If you’d like to donate or apply for a scholarship, visit the AEG Foundation website. 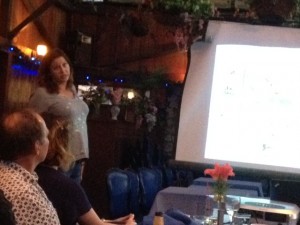 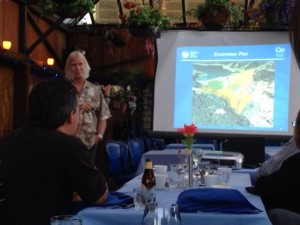 Dr. Jack presented the challenges and solutions to biological concerns at the project site related to permitting and protection measures for species including eagles, red-legged frogs, and tiger salamanders. 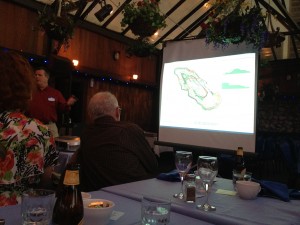 May 2012: Bill McCormick, PG, CEG of Kleinfelder presented “Geology and Geohazards of Alcatraz Island (and other cool behind the scenes pictures)”

Bill’s presentation included a discussion of the challenges to mapping the island as well as the presence of parallel joint systems and a probable fault. 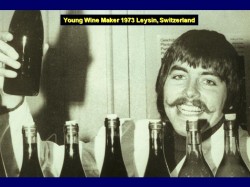 Scott Burns in his early days of wine making 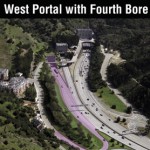 Caldecott Tunnel Fourth Bore, the fourth in a series of tunnels connecting Orinda with Oakland 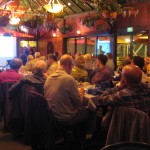 November 2011: We hosted the annual AEG / ASCE-SFGI Joint Meeting featuring: Glenn Borchardt, PhD of the Progressive Science Institute and Michael Dwyer Private Consultant who presented “Building on Ancient Soils Immediately Adjacent to Active Faults” with an extra feature “The Ten Assumptions of Science and the Demise of Cosmogony”