Join us for our just-added special edition September 2013 Section Meeting!

Our speaker, the 2013 Richard H. Jahns Lecturer: James McCalpin will join us for a special Thursday meeting, September 26th.

The Mountains Are Falling Apart; A Spectrum of Mass Failures from Landslides through Deep-Seated Gravitational Spreading (Sackung), to “Unfolding” of Folds by James P. McCalpin of GEO-HAZ Consulting, Inc

Read on for our speaker’s biography and abstract. We hope to see you on September 26th! 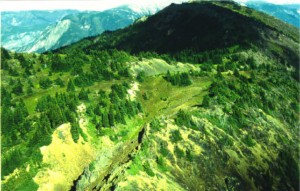 J.P. McCalpin earned his BA in Geology from University of Texas (’72) and MS from University of Colorado (’75), specializing in geomorphology, Quaternary geology, and rock climbing. He did postgraduate work at University of Alaska, which led to employment in the Alaska Branch of USGS in 1976, and later the Branch of Western Environmental Geology (Menlo Park) in 1977, where he was first introduced to the “new field” of paleoseismology. In 1977 he imported these paleoseismic methods to Colorado and its Rio Grande rift, while mapping and trenching the Sangre de Cristo fault for his PhD at the Colorado School of Mines. After graduation he served as County Geologist for Jefferson County, Colorado in 1982, and then joined the faculty at Utah State University where he taught geomorphology and engineering geology from 1982-1991.

In 1991 he left academia and founded GEO-HAZ Consulting, devoted to applied geological consulting for geologic hazards, primarily seismic and landslide hazards. A related project was publication of the reference book Paleoseismology in 1996, in collaboration with many early US paleoseismologists. The book won the AEG Holdredge Award in 1999 and the GSA Burwell Award in 2000, and is now in its 2nd edition (in English, 2009; in Russian, 2012). In his 20+ years at GEO-HAZ Dr. McCalpin has completed 140 geologic hazard projects in 40 countries, analyzing seismic and other hazards to developments ranging from residential subdivisions to ski areas, from dams to nuclear power plants. Since 2001 he has taught a summer field course in neotectonics and paleoseismology, using the only permanent paleoseismic teaching trench in North America. He enjoys collaborating with international earthquake scientists, and especially with their newer generation of students interested in geologic hazards and in geo-constraints to sustainability and quality of life.

Abstract – All engineering geologists can recognize obvious, young landslides from their sharp, distinct geomorphic elements (headscarp, lateral margins, toe thrust, hummocky topography). However, we often see isolated elements without the others and are unsure of their exact origin and engineering significance. Recent geologic mapping in mountainous areas of Alaska, California, Colorado, and Utah, supplemented by LiDAR DEMs, has revealed an abundance of young scarps, graben, bulges, and other geomorphic anomalies. Some landforms are sackungen formed by deep-seated gravitational spreading (called by Doug Morton of USGS “half-a-landslide”). Gravitational spreading results in detachment of large masses of bedrock from mountain flanks, causing lateral bulging and vertical collapse of the crest. Detached blocks do not display hummocky topography because they are not rubble, as are landslide deposits. Instead, stratigraphy and structure within the blocks is relatively undisturbed, so geologic maps show these areas as unfailed bedrock, and do not hint that the block margins are sites of recent deformation with engineering significance. As local relief in mountains increases (often due to valley glaciation in the Pleistocene) and active tectonism increases, the types of different failure styles and number of failures increase. In southern Alaska the combination of high relief and seismic shaking has even led to the Quaternary “toppling- unfolding” of pre-Quaternary folds, due to gravitational spreading and development of extensional flexural-slip faults. Lower-relief areas in Colorado show similar swarms of young scarps related to unfolding of Cretaceous folds by evaporite dissolution in underlying rocks. Taken together, the landforms now known represent a nearly- continuous spectrum of mass failures, ranging in scale from small landslides that we would all be able to recognize, to incipient landslides, to large detached parts of mountains, to deep-seated gravitational spreading that looks almost tectonic in nature. In mountain areas that contain active faults, it is difficult to separate the tectonic- seismogenic structures from the gravitational-nonseismogenic structures, but these two types have different hazard significance for engineering geologists. Two recent conferences in Europe on “Slope Tectonics” explore this topic, which has not yet been recognized in the USA (1st in Lausanne, Feb. 2008, pub. as Geol. Soc. London., Spec. Pub. 351; 2nd in Vienna, Sept. 2011).